83 competitors from Arizona, San Diego and the Coachella Valley got the opportunity to be a part of the first “Mr. Pickleball” award presentation to Christopher Thomas. Chris, the USAPA Regional Ambassador for the West region, has worked so hard to get pickleball into just about every resort and tennis facility in the Coachella Valley.  A few the venues he’s penetrated are Del Webb Sun City, Mission Hills, Tamarisk CC, PGA West, Del Webb Shadow Hills and several tennis centers such as Civic Park and Cahuilla Park. 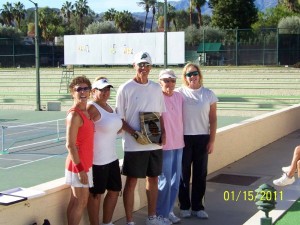 A group of his fans and local dedicated picklers got together to present him with a plaque, dinner and movie tickets to thank him for his commitment to pickleball.  Barbara Wintroub made the presentation with Stephanie Ice, Jesse Dawson and Karin Walton assisting.

The plaque said, “In appreciation of the dedication, commitment and untiring promotion for the sport of Pickleball in the Coachella Valley, The Pickleball Community presents to Christopher Thomas “The Mr. Pickleball Award” January 2011.”

We now have enough pickleball clubs that we can start a league.  Thank you Christopher!